Naming The Big Muck Inside You: An Interview with Mitski

It’s been over a decade since I added a songwriter to my life’s soundtrack — the music that plays when I’m by myself; songs that become the vehicle for my own feelings and melodies to emerge — but Mitski‘s entire catalog made the cut last year.

This talented human is unflinching in her willingness to march bravely inward, and unmatched by her peers in her relentless pursuit of truth as a songwriter.  In short: Mitski Miyawaki is the real deal.

I caught up with Mitski this week for Keep Oregon Well in advance of her upcoming Portland show at Wonder Ballroom.  We talked about music, self-care, mental health and more.  Read our chat below. 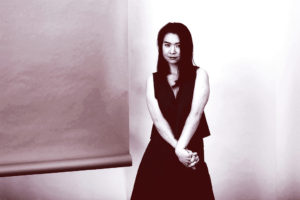 Logan Lynn: Hi Mitski! Thanks so much for taking the time to chat. I know you are in the midst of a super busy tour right now. How long are you on the road for this round of shows?

Mitski: I can’t really tell anymore. This west coast tour is two weeks long, but I have tours back to back after it, so I won’t be “off the road” until August. I used to think of my life on the road as somehow separate from my life off the road, as if tour was this thing I had to get through in order to get to my “real” life off the road. But now that I’m on the road more than not, I’ve had to shift my thinking away from looking at my life in chunks of time – it’s unhealthy to think of 9 months out of a year as “not the real part.” So now I just focus on what I’m doing each day.

Logan Lynn: That sounds so healthy!  As you know, I run Keep Oregon Well, a campaign and social movement centered around rock and roll, designed to fight the stigma of mental illness. We have been interviewing all kinds of bands, authors, comedians, artists and celebrities about self-care and mental health and it’s been really cool to realize how many of us in the music industry have at least some level of lived experience around these themes. How do you take care of yourself while you are on the road and away from home for such long periods of time?

Mitski: The key for me has been to treat life on tour as my real daily life, not as some kind of vacation from life. It’s hard to keep this in mind given the circumstances; you’re in a different city every morning, you’re basically paid in beer every night, and your job requires your body to pump adrenaline through itself every single day. But if I had a job at an office, I wouldn’t show up to work in the morning and take a shot of liquor, so I try to treat playing shows like a normal job by not drinking.  On tour you have to make an effort to fulfill the most basic human needs, like sleeping, eating, and maybe moving your body and keeping it healthy, because you can’t rely on routine for any of these things to happen. You learn to be disciplined, to make time for sleep, to insist on eating even if it’s not in the schedule, to find a way to work out in a closet space in the venue, because otherwise you can’t keep living this lifestyle. 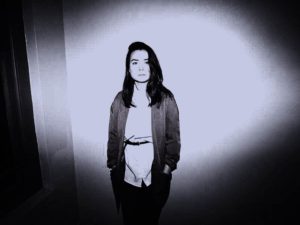 Logan Lynn: It can also be difficult traveling with other people, even if everyone loves each other and gets along. Do you have any tour tricks for keeping people in good spirits in such close quarters?

Mitski: It’s funny, I’ve had completely sane, happy, outgoing friends go on tour for the first time and become brutally exhausted and depressed, and not know why. I’ve learned through touring that even the most social people need time and space to be alone and unoccupied, as much as they need sleep to function, simply for their brain to organize itself, to take inventory, which it can’t really do while engaging with another person. I think people who don’t tour never really have to think about this, because often these small moments of mental reorganization are woven into a daily routine.  So touring people learn, whether consciously or not, how to be in their own private world while being around 8 other people in a small room, and also how to respect other people’s private space in such close quarters. You could be sitting facing your bandmate in a restaurant, but if either of you need to not talk and pretend the other person isn’t there, then that’s accepted and respected as a natural thing. If there’s some spare time between soundcheck and the set, and someone wants to go take a walk, or get a coffee, or have a one night stand – anything as long as it doesn’t affect everyone else’s job – it is 100% respected and valued.

Logan Lynn: Ah, yes.  Respect!  The secret sauce.  Speaking of respect, I am a big fan of your work.  I think I’m so drawn to your songs because of what I sense to be a deep connection to yourself interwoven throughout all of the stories you tell. Do you think writing songs has been a gateway to a deeper understanding of yourself?

Mitski: I think the most important process for understanding the world and what’s going on in yourself is to name things. We name streets, flowers, people, experiences, identities – we need to name a thing in order to make sense of it. I think songwriting is another naming process, where you give a name to a big muck inside you, or at least a little part of the big muck, in order to feel like you know it, and know where to put it. So I could say that writing songs has been a gateway to a deeper understanding of myself, but I actually think songwriting has given me a much simpler understanding of myself, in that all these messy, dark, unknowable things can be named, and become 3-minute songs to put on an iPhone instead of stirring in the big goop of the mind. 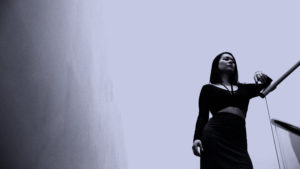 Logan Lynn: “Naming the big muck inside you” — god, that’s beautiful.  And so right.  That’s the thing all of us are trying to do, I think.  As public people, we often get to carry around the weight of our actual selves, as well as a multitude of projections from others. How are you adjusting to the pressure of being well known?

Mitski: Well, I’m not a famous celebrity; I don’t get recognized in my daily life, so as long as I don’t read anything that’s written about me online, I can walk around like everyone else. But I also think touring and playing shows actually keep me grounded! I think if I stayed home and had everyone’s opinions on social media and the press funneled into me, without the context of my normal self, I would become very confused as to who I am and how I should move through the world. The brutal thing about the first show on a tour, after you haven’t performed for a while, is that you forget what it means to be faced with real people standing in front of you, and maybe you’ve already started believing whatever hyped up thing that’s been said about you. So you might walk on stage feeling like a god among humans, but you very quickly discover you have only yourself, and you have to look inside yourself for something real and human to present to the people right in front of you, because they’re standing there, and they paid for their tickets, and they need something real to take home. You go back to being one person, trying to say something.

Logan Lynn: Your song “Your Best American Girl” was my favorite song released last year. Hands down. It’s heartbreaking and empowering and just completely perfect and beautiful. Is music therapeutic for you? It feels like you are processing and exploring such tender areas of the heart. How did you get to a place where you felt brave enough to let the rest of us be in this exquisite, tender heart experience with you?

Mitski: I’ve never had any anxiety around showing my insides to people, it’s always felt like something I have to do. I think it’s helped that I’m deluded enough to think that I have a purpose in life, and that purpose is to make music. So whenever I’m presenting my heart to strangers, I just feel like I’m doing what I’m supposed to do, and whatever consequences that come with it are also just part of my lot in life. I do think music is therapeutic for me, in that it gives me this purpose. Before I wrote music, or rather before I knew I could write music, I was very self-destructive and didn’t care whether I lived or died, because I hadn’t any meaning. Now I don’t want to die. 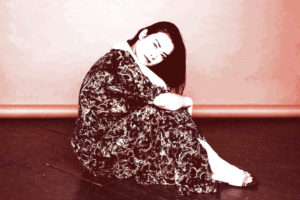 Logan Lynn: You recently tweeted “I used to rebel by destroying myself, but realized that’s awfully convenient to the world. For some of us our best revolt is self-preservation.” As a queer person who has struggled with depression and suicidal ideation for decades (and is celebrating 9 years clean from cocaine and alcohol this week) I really relate to this. What was the catalyst for this reframe and change in your life?

Mitski: Happy 9 years!!!!!!  I can’t recall any a-ha moments. I think it was a general time period right after college, when I was around a lot of people who identified with punk, and I watched all these white boys from nice suburbs destroy themselves daily, and thought, “oh, huh, I don’t have the privilege to do this!” I realized they could act this way because they had safety nets, they had networks that would save them when they’re ready, and that would eventually let them safely grow out of their rebellion and return to the nice things they were raised with. But if I continued on the same way, I would just be left to die. The world hasn’t really expressed that it wants me to exist to begin with, so I would just be helping the world along in the process of my destruction. I’m too spiteful to let that happen.

Logan Lynn: That determined voice comes through so clearly in your songs, Mitski.  And I am so glad you are here!  Thank you again for chatting with me today and for being so open about your journey from there to here.  I am so excited for your show at Wonder Ballroom next month!!!!

Mitski: Thank you for such wonderful questions, and for listening to me go on and on. See you soon!

There are many ways you can help build a brighter future with us as we walk shoulder to shoulder with children, families and our communities.You can make a one-time contribution, schedule monthly donations, establish a trust or plan a bequest in your estate by clicking “donate” below.

We are excited to collaborate with you to make a meaningful difference in the lives of children facing emotional challenges. Join Trillium’s community of contributors today.